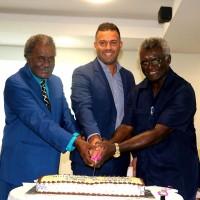 A DEAL to strengthen the newly introduced Public Private Partnership (PPP) arrangement between government and the Solomon Islands Chamber of Commerce (SICCI) was formally sealed yesterday in Honiara.

A statement from the Prime Minister Press Secretariat said, this historic Memorandum of Understanding (MOU), paves a way for a strengthened partnership between the government and private sector under this arrangement.

“The MOU was signed by the Prime Minister Manasseh Sogavare, Minister of Commerce, Industries, Labour and Immigration, Hon Elijah Doromuala and SICCI Chair, Jay Bartlett, at a ceremony held at the Heritage Park Hotel in Honiara.”

Mr Bartlett described the deal signing in his opening address,  as a significant milestone that will formalise the partnership between the parties through dialogue.

“We are here to sign our MOU. A significant milestone in the progress we have made to strengthen the partnership between government and business.

“This MOU establishes a formal, structured private sector dialogue mechanism that may allow us to arrive at an agreed position on reform priorities and develop solutions that are in step with the ever changing domestic, regional and global landscape.”

Mr Bartlett said that mechanism has been the focus of SICCI for the last 24 months and on that note thanked the SICCI Secretariat, Members and Affiliates for the continued support to the Board and its vision to focus on a framework.

He thanked the Democratic Coalition for Change Government (DCCG) on behalf of SICCI Board and Members for placing value on its relationship with SICCI and agreeing to the establishment of an MOU.

In his accolade to the Government, Mr Bartlett made special mention of Mr Sogavare for playing a key role in ensuring that the partnership framework became a reality by co-signing it with Minister Doromuala on behalf of the Government.

He also made special mention of the support provided by the Ministry of Commerce, Industries, Labour and Immigration in driving the partnership framework initiative and co-hosting the signing ceremony with SICCI.

Mr Sogavare in his keynote address said the MOU is critical as it provided a platform for policy dialogue, bolsters understanding of the Government of the needs of the private sector and strengthens Government relationship with businesses.

He added that through the setup of an Advisory Group, the Government and the private sector will work towards exploring solutions that a tailor-fit to Solomon Islands context.

The Prime Minister said under the Advisory Group, the Government will work with the private sector to make recommendations towards the effective implementation of identified Public Private Partnership opportunities.

“This is a strategy to encourage the government to lend an open ear to the sector that creates the country’s wealth and pays the taxes that support the operation of the Government.”

Mr Sogavare said as Solomon Islands begins the post-RAMSI era, it is important than ever for the country to consolidate efforts to drive economic growth, create jobs and harness efforts to build a prosperous nation.

On that note, he encouraged the private sector to work with the Government on the platform of the MOU to create innovative schemes of arrangement that would encourage and allow local innovations amongst Solomon Islanders to be recognised.

He said innovation are the future of Solomon Islands and believes that that the provision of incentive packages for innovation competitions will encourage youths to positively use their energy to create things and ideas for the betterment of the country.

The ceremony was attended by Government and SICCI officials, representatives of the private sector organisations, diplomatic corps and community representatives.